Sundials are the most ancient and natural method of telling the time, with the oldest sundial probably being pre-historical man noticing his shadow lengthened and shortened during the day.

Any structure that marks the passage of the sun throughout the day can be considered a sundial.

Although immensely impressive, ancient structures such as Stonehenge in Wiltshire and New Grange in Ireland are not true sundials in the modern sense, as they use the sun to mark the season rather than the hour. 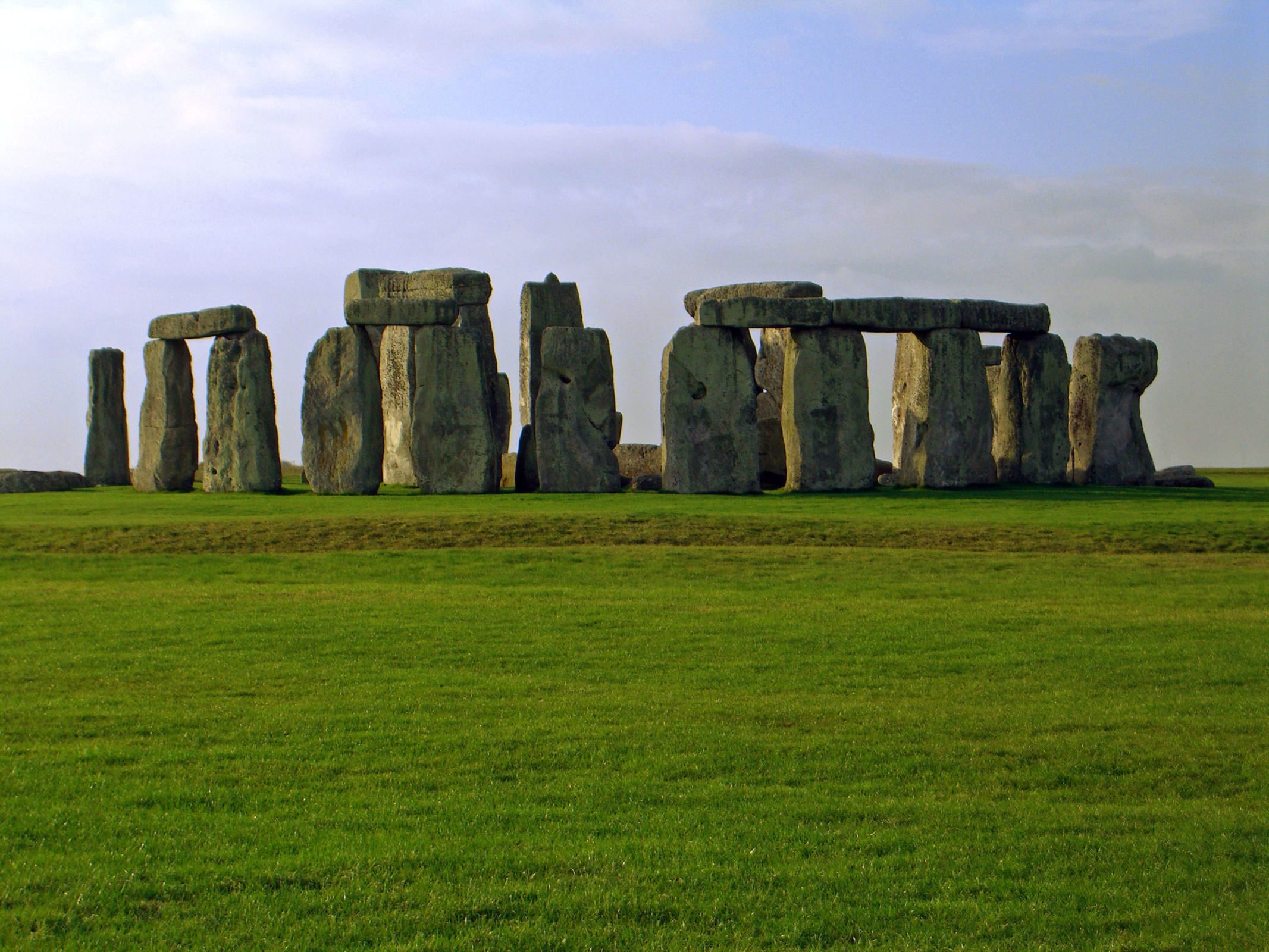 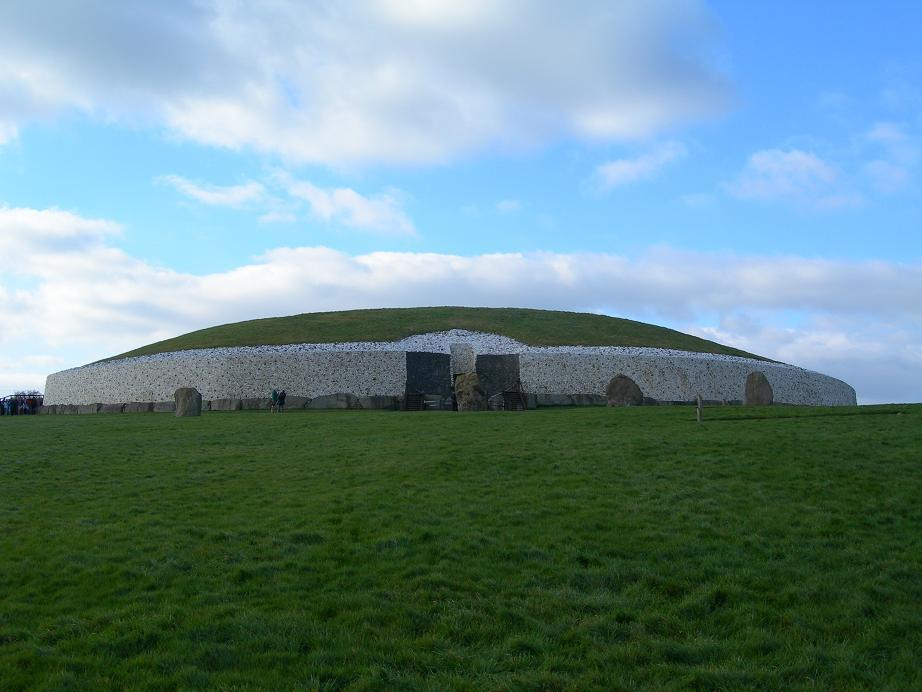 The oldest true sundial, that we know of, is an Egyptian shadow clock made from green schist and built around 1500BCE in Egypt. Shaped like a letter L the length of the shadow cast by the vertical leg and cross piece along the horizontal leg indicated the time. The base, on which is inscribed a scale of six time divisions, is placed in an east-west direction with the crosspiece at the east end in the morning and at the west end in the afternoon. The length of the shadow on the horizontal leg indicates the time. Sundials of this kind were still used until recently in parts of rural Egypt. 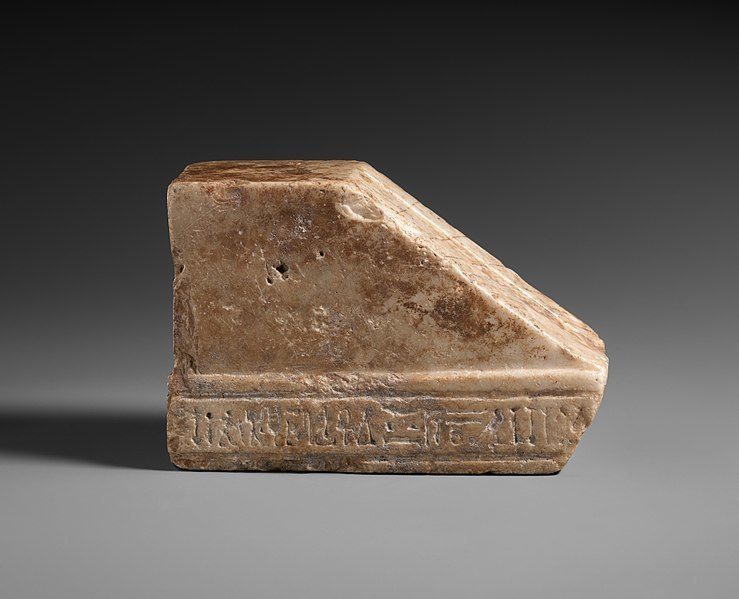 A later development was the hemispherical sundial, or hemicycle, designed by the Greek astronomer Aristarchus of Samos in C280 BCE. The instrument consisted of a hemispherical opening carved into a block of wood or stone. To which a pointer or style was fixed with it’s point at the centre of the hemisphere. The tip of the pointer’s shadow would trace an arc of shadow across the surface of the hemisphere throughout the day. 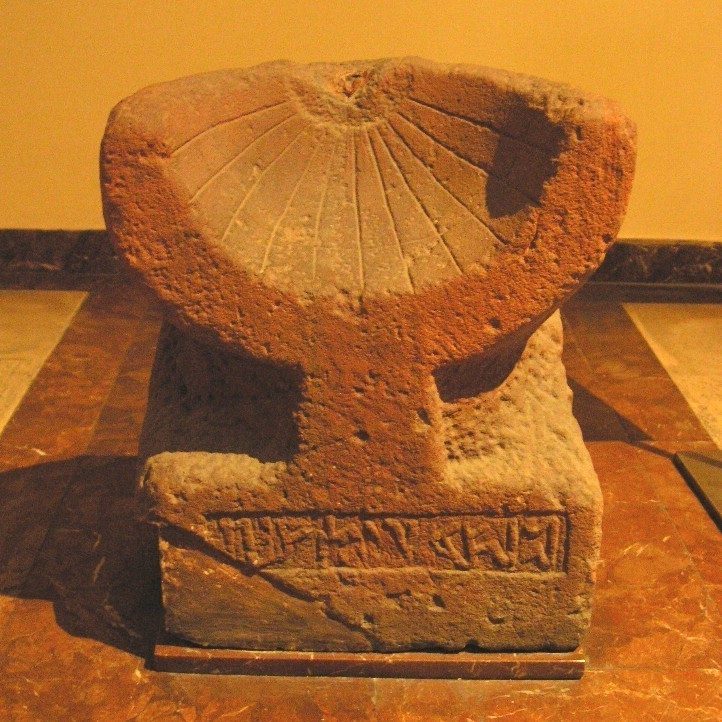 The day was divided into 12 hours from sunrise to sunset, hence, as the days vary in length throughout the year, the length and position of the arc varied according to the seasons, and an appropriate number of arcs was often inscribed on the internal surface of the hemisphere.

This obviously resulted in longer hours in the summer and shorter in the winter, what was know as Seasonal Hours.

Aristarchus’s sundial was widely used for many centuries and, according to the Mesopotamian astronomer al-Battani (858–929 CE), was still in use in the Arab world until the the 10th century.

The Babylonian astronomer Berosus (c290 BCE) developed a variation of this sundial by cutting away the part of the spherical surface south of the circular arc traced by the shadow tip on the longest day of the year.

The medieval Muslims further developed sundials to provide a reliable means of determining the times of prayer. Hence most Muslim sundials contain lines indicating these times, and indeed on some they are the only lines shown. 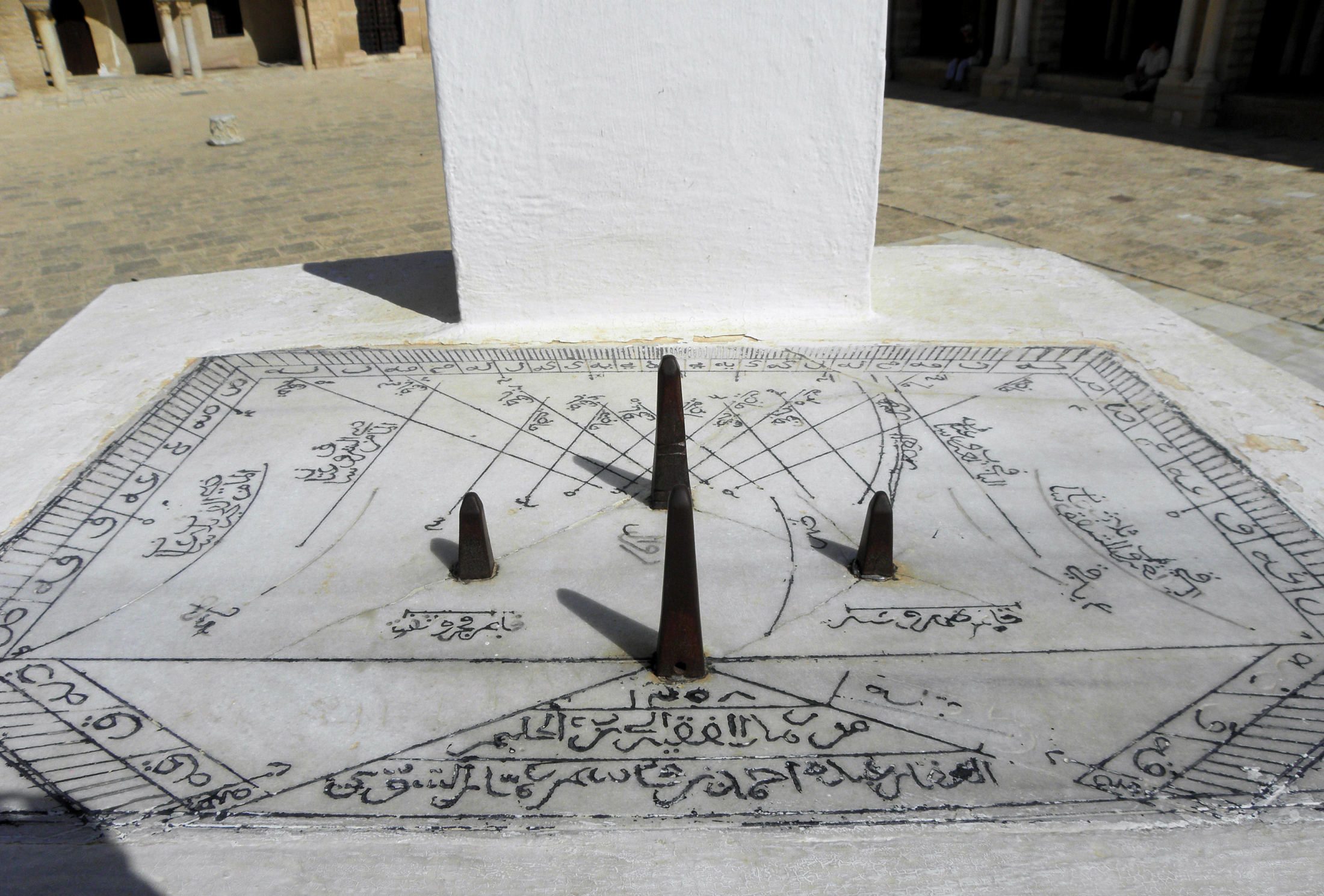 The idea of using sundials to tell the time of prayer was also popular in European monasteries between the 12th and 16th centuries. These ‘scratch dials’ are often very simple and consisted of a hole with lines radiating from it. 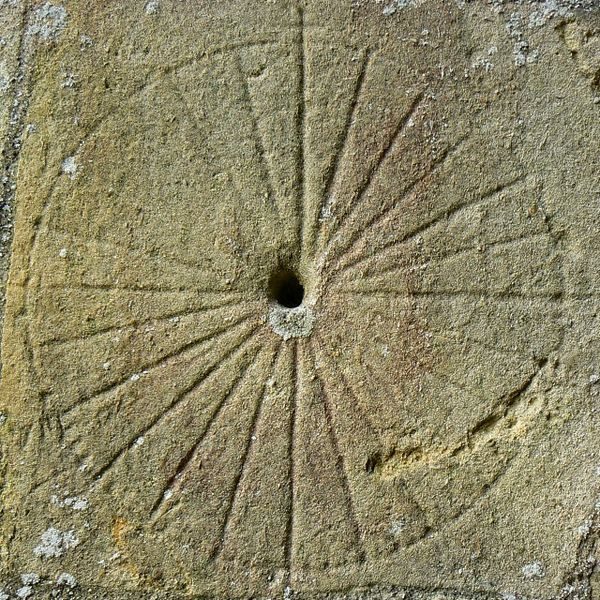 Scratch dials are nearly always near doorways, and were likely home-made by the monks to keep track of prayer times. A thin stick or pencil (or even a finger) would be inserted in the hole, and the resulting shadow indicates the time.

Although the Arabs learned the basic principles of sundials from the Greeks, they increased the variety of designs available through their understanding of mathematics, especially trigonometry. It was the Arabs who worked out that the gnomon needed to be parallel to the axis of the earth. At the beginning of the 13th century CE, the Moroccan astronomer Abu al-Hasan al-Marrakushi described many different types of sundial, and is credited with introducing the concept of equal length hours.

The Romans perfected the horizontal sundials we know today and also invented portable travelling versions. Although we can’t be sure, it seems that the Romans were the first to make sundials purely for fun. This portable sundial discovered in Heracleum (destroyed by Vesuvius at the same time as Pompeii) is made to look like a cured ham! The small bronze ‘lump’ was unearthed in Heracleum in the 18th Century. It was immediately identified as a sundial by the markings, but the gnomon was lost, so it couldn’t be read. Recently however a 3D printed copy has been made with a pig’s tail as the gnomon, and with some experimentation it works perfectly. 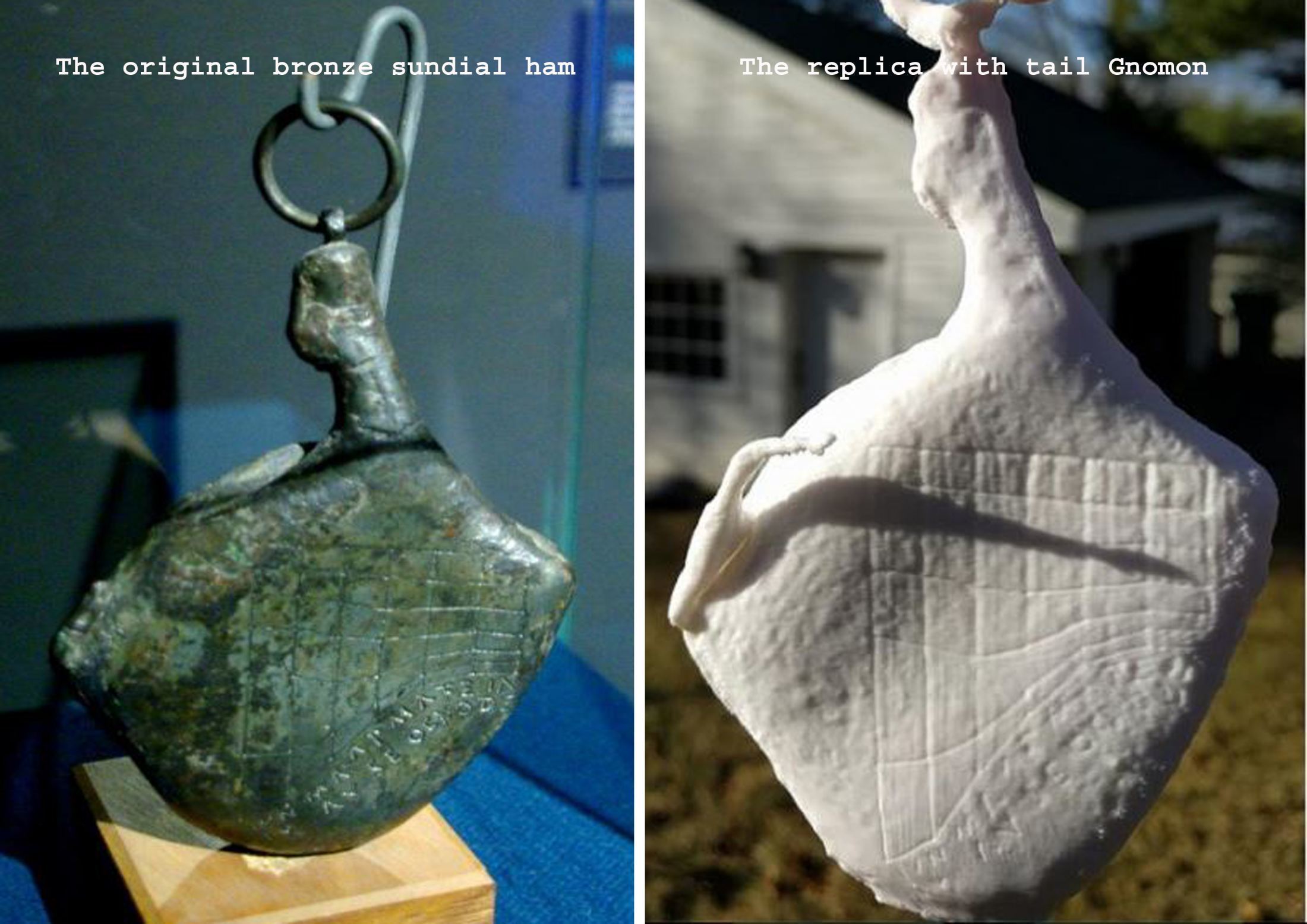 The Romans were also the first to use sundials in gardens. Roman gardens were private spaces, set behind houses and enclosed on all sides by rooms and colonnades. In the midst of this ordered scene was the sundial. Set on a stone pedestal to catch the shadow of the Sun God Sol as he drove his chariot across the sky. I think this is the image of the sundial that most fits in with the modern psyche.

So carry on the age-old tradition of placing a sundial in a sunny spot. In gardens, sundials will never be out of fashion; set on a stone plinth, a sundial creates a focus for the garden and allows you to watch the hours pass as you spend your time weeding, or dinking your first glass of wine…

With the advent of mechanical clocks in the early 14th century, sundials with 12 equal hours gradually came into general use in Europe. There have however been attempts to introduce new systems, most notably the French Republican Calendar of 1793 which imposed a decimal timescale with a 10 hour day, each hour divided into 100 minutes, and each minute having 100 seconds. Not surprisingly it wasn’t a success and was abandoned in 1795. Very few decimal sundials were made, and I’m not aware of any still in existence, but here is a rare decimal pocket watch. 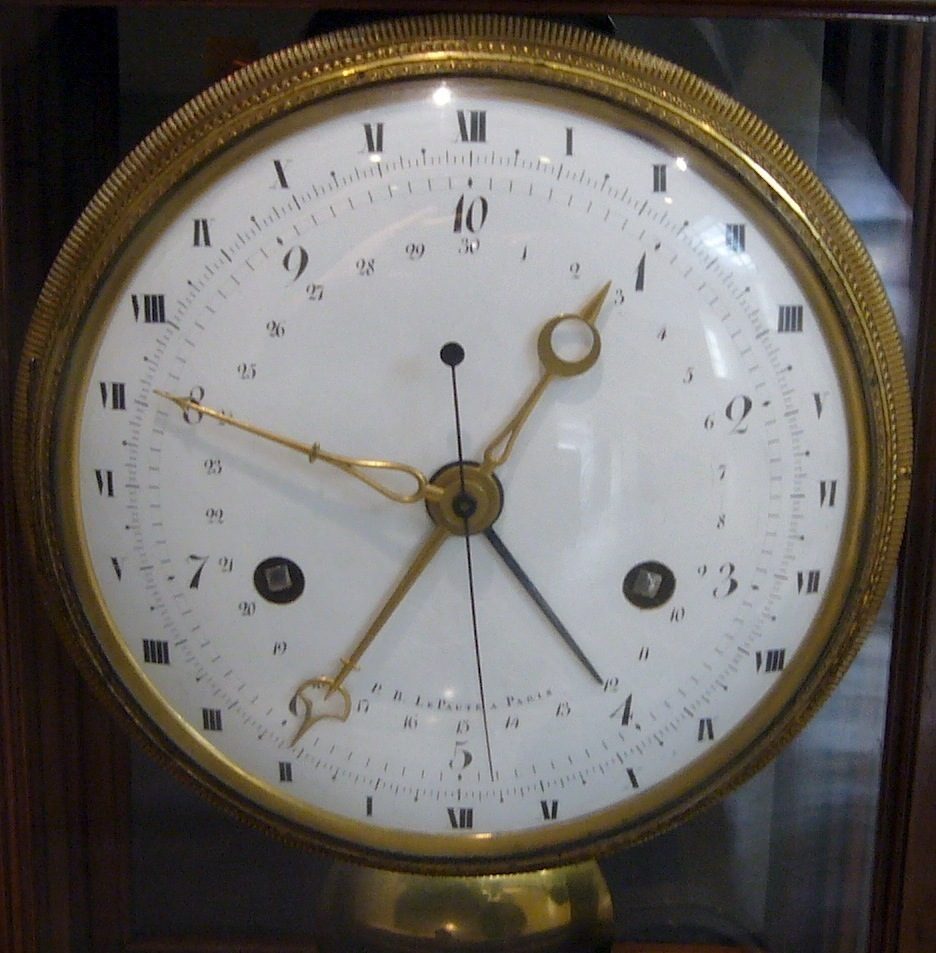 The invention of clocks is often blamed on the demise of sundials, but this isn’t the case. The early clocks just weren’t very accurate and needed to be regularly calibrated by a sundial to bring them back on time. Indeed sundials were in use by the French railways to regulate their mechanical clocks until very recently, with the last stations abandoning their sundials in 1900.

And we mustn’t forget that leap days and leap seconds are ways to reconcile the inaccuracy of clocks with solar time.

It was the telegraph which finally retired the sundial. Once it was possible to broadcast a time signal around the country, or indeed the world, clocks could be kept in time without the sundials’ help.

The future of sundials?

Our ancestors only had to look up to tell the time as sundials were mounted on the outside walls of many churches and public buildings. But now with mechanical, quartz and even atomic clocks all around us, you could be forgiven for thinking that they have been retired to the garden.

Surprisingly and gratifyingly this isn’t the case.

Sundials are still being used scientifically by NASA and the furthest sundial from earth is currently an important part of the Mars Rover. The sundial on the Rover is always in view of the cameras, and is used as a backup navigation aid if the other instruments fail. 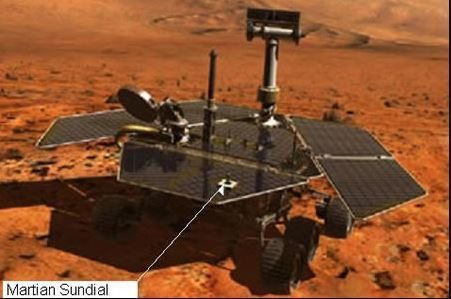 Because NASA know what time a photograph was taken, they can calculate the direction of the rover by where the shadow falls on the sundial. A sundial used backwards, but a sundial nonetheless!

Deep in a mountain in Western Texas is the Long Now Clock. This is a magnificent project to ‘build a clock that ticks once a year. The century hand advances once every 100 years, and the cuckoo comes out on the millennium, and every millennium for the next 10,000 years.’

This magnificent project will be the most complex and accurate mechanical clock ever built, but even this could become inaccurate over the centuries and millennia. So the designers have incorporated the The Thermal-Difference Device.

The Thermal-Difference Device involves a Sapphire glass window through which the light of the midday sun will pass, through prisms, onto a series of rods which will expand in the heat and transmit the passing of Solar Midday onto the innards of the clock deep underground, allowing it to re-calibrate itself daily (or when the sun shines).

Yet again, a sundial is being used to regulate a clock. And will do for 10,000 years! 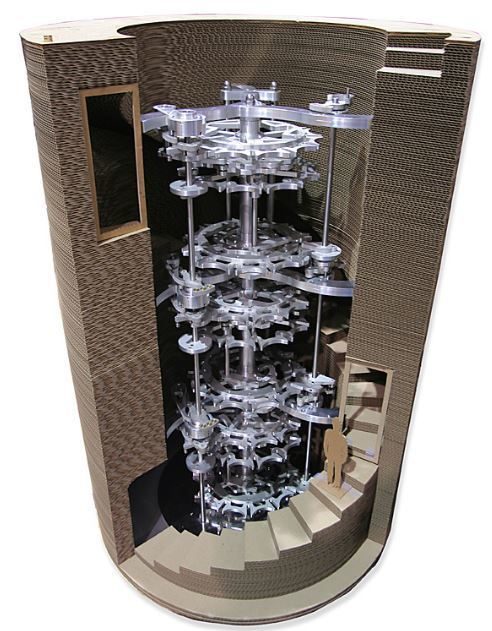 Sundials have come a long way, from cavemen to spacemen! Where will they take us next? I am reminded of the classic ‘Dawn of Man’ scene in Stanley Kubrick’s ‘2001 A Space Odyssey’.