How do Sundials Work

Of course we all know it’s really the rotation of the Earth on its axis which causes the shadows to move, but for convenience we say the sun moves.

For every degree that the Earth rotates, the sun appears to move one degree across the sky. It takes the sun 4 minutes to cover 1 degree, and an hour to cover 15 degrees, therefore 360 degrees or one full rotation in 24 hours.

If you know this and where South is, you have all you need to tell the time. Let me explain: The Sun goes round the Earth in 24 hours. Therefore if it is due South at midday, and due North (hidden from us by the Earth) at midnight, then at 6am it must be due East, and at 6pm it will be at due West. If you look to the South, East is over your left shoulder and West on your right shoulder, so it is easy enough to estimate the angle of the sun between these points and guess the time. Possibly not good enough to keep an appointment, but a good trick, and you get better with practice. 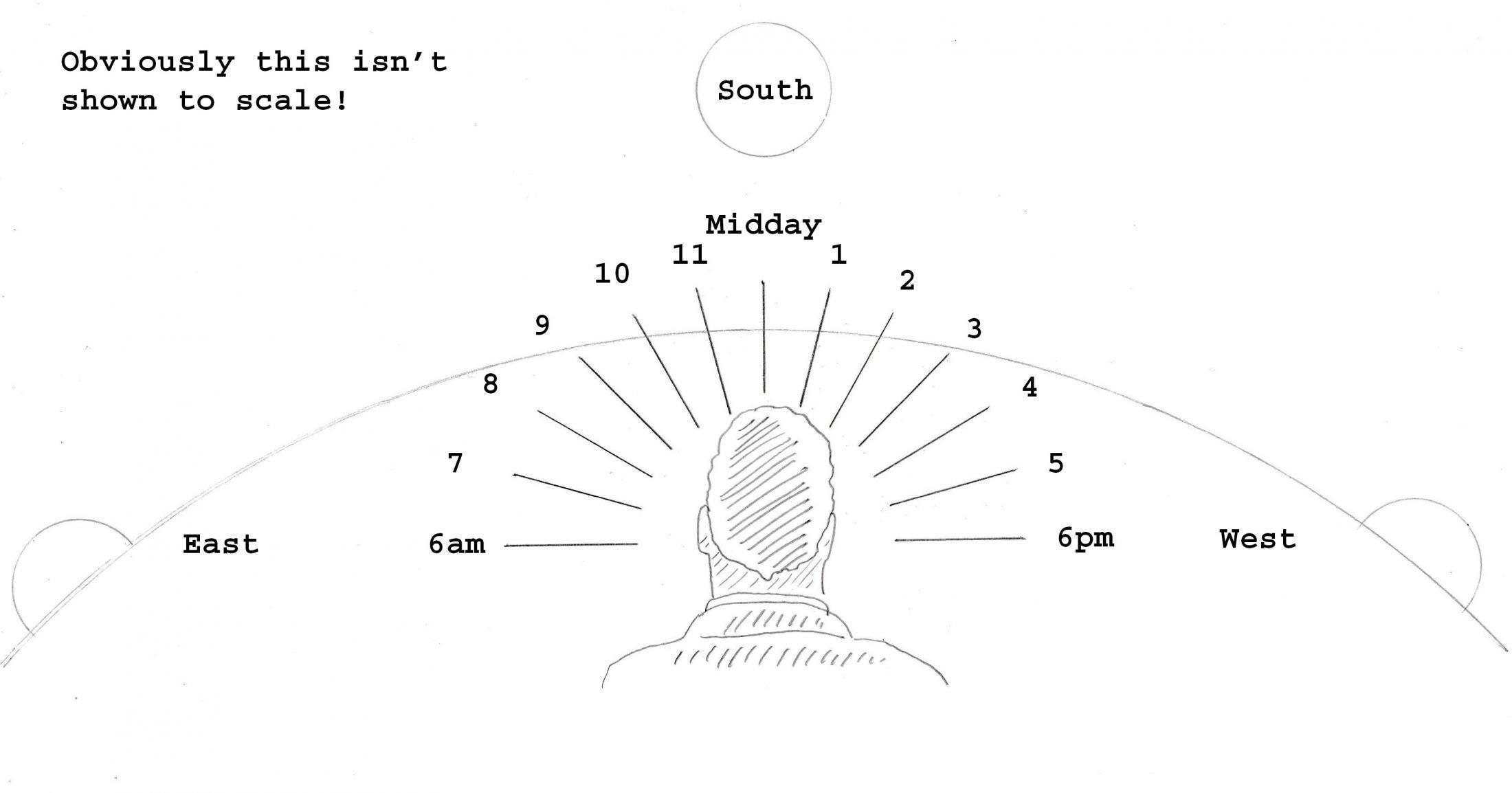 A sundial is a device that tells the time of day by measuring this apparent movement of the Sun accurately. The simplest sundials consists of a flat plate (the dial) and a shadow caster (the gnomon) which casts a shadow onto the dial. As the sun appears to move across the sky, the shadow aligns with different hour-lines which are marked on the dial to indicate the time of day.

The gnomon usually casts a broad shadow so that it is easy to see, however this can lead to uncertainty over which side of the shadow to read. To avoid this one side is usually curved and the style will be a straight line which lines up with the hour lines.

On more complicated sundials the gnomon may also be a rod (like an armillary sphere), a wire or anything else (such as your own body).

The style of the gnomon must be parallel to the axis of the Earth for the sundial to be accurate throughout the year. Therefore the style’s angle from horizontal is equal to the sundial’s geographical latitude.

You can see from this picture that a sundial on the equator would have a gnomon angle of 0 degrees, while one on the poles would have an angle of 90 degrees. 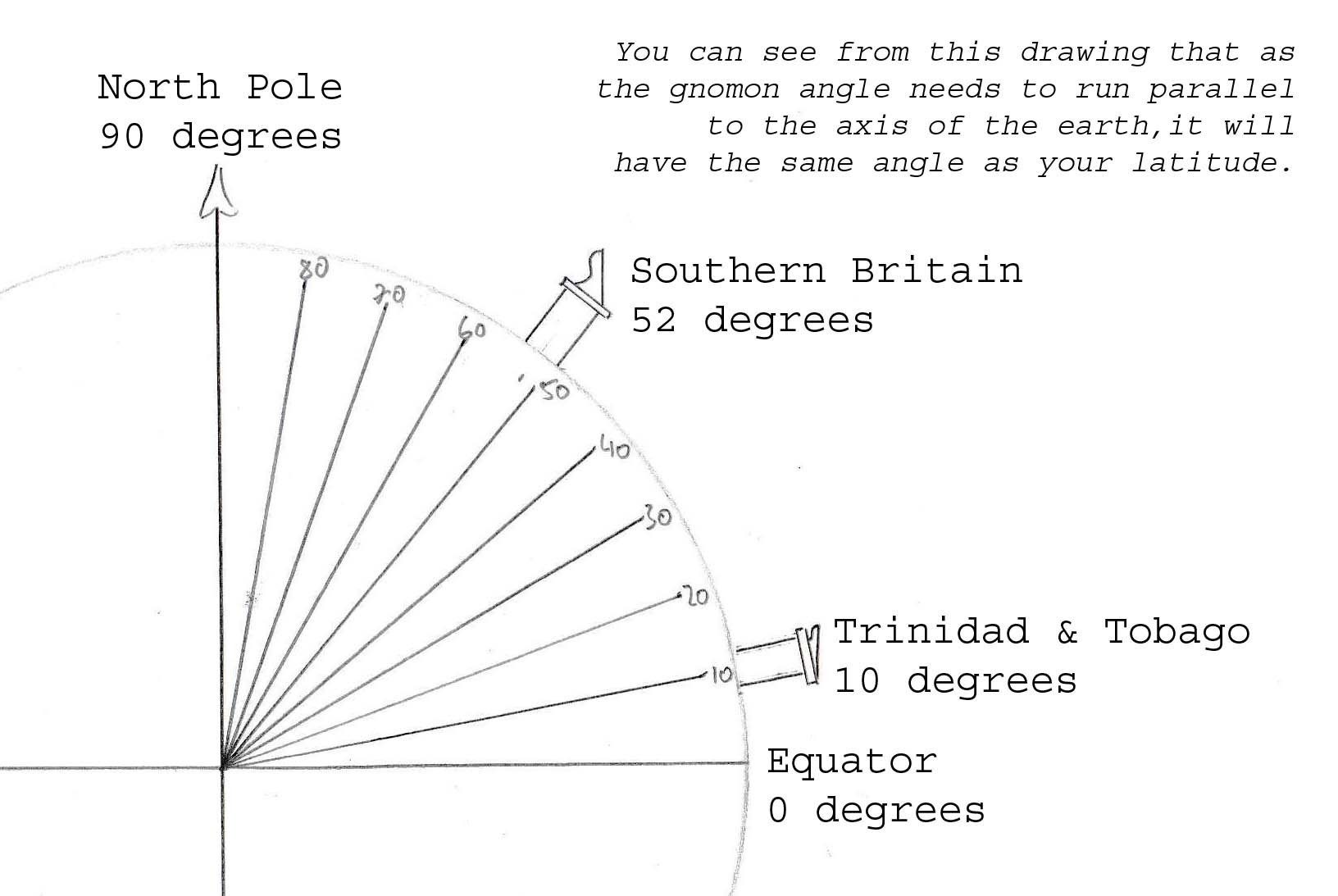 Using the sun’s light to cast a shadow onto the hour lines, sundials tell ‘Local Apparent Time’ rather than ‘Mean Time’ as conventional clocks do. To make modern life work, the world is divided into time zones and our clocks are set to national or regional time (GMT for the UK).

For each degree of Longitude to the West of Greenwich (or your local meridian) the sundial will appear to be four minutes slow and for every degree to the East it will appear four minutes fast. This is the time it takes the sun to travel one degree, and is known as Longitudinal Variation. 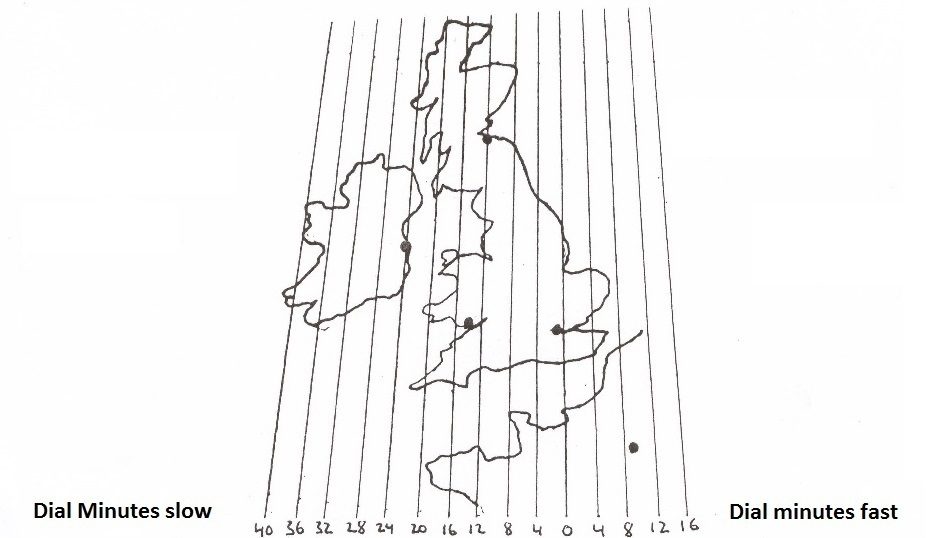 Sundials do not understand daylight saving time, so in the summer you will need to add an hour onto the time shown to take account of British Summer Time.

By adding or subtracting the Longitude Variation and the Equation of Time you are able to read GMT at any position in the country.

The Equation of Time

Longitudinal variation and Summer Time are fixed and easy to understand. Much more complicated and deserving of it’s own page is The Equation of Time.