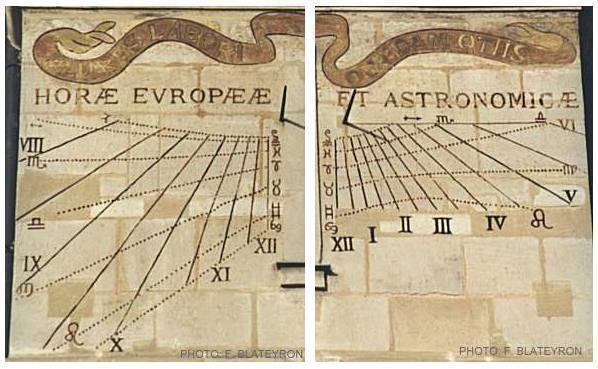 Perhaps the most delicate and decorative designs we’ve featured as our ‘Sundial of The Month’, the Lycee Louis-le-Grand school in Paris has one of its towers beautifully adorned with sundials.

Situated in the Latin Quarter of Paris, the building was originally built in 1560. Some years later, in 1679, the courtyard tower was added complete with large sundials, four on the South side and two on the East and West sides.

While the sundials were originally a functional focal point of the tremendous building, sadly their intended purpose today has been compromised. Two of the sundials have been erased and while the four dials on the South side of the tower were restored in 1988, unfortunately their restoration was not entirely accurate, resulting in errors in the layout.

The Solar Time dials are numbered at the bottom in Roman numerals. The declination lines are drawn in dotted lines and have the signs of the Zodiac at their ends. Notice that some lines have a chaotic outline, the effect of the unfortunate restoration of 1988.

Italic and Babylonian Hours also have their own sundials. The Babylonian Hours, counted from one sunrise to another, are represented by the rising lines on the left part of the dial and are numbered from 1 to 7 on the left and from 8 to 12 on the right (lines 5 to 7 do not have a number on the right). The italic hours, counted from one sunset to another, are the descending lines on the left part of the dial. Their numbers are not shown. There are also the temporary hours, counted from sunrise to sunset (over 12 hours). These are represented by the descending lines, on the right part of the dial. They are numbered to the right from 7 to 12, and to the left from 1 to 6 but are not drawn to the right. Dashed lines are the declination lines associated with the signs of the Zodiac. These two dials are difficult to read because of the confusing and partial layouts and especially because of the 1988 restoration which erased some essential information. 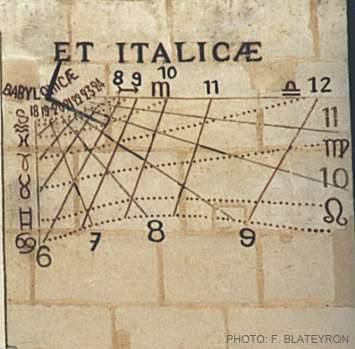 Variations of the mean time with respect to the solar time can be seen on the above sundials. The plotting of curves, particularly on the left is incorrect. The bottom of the curves should be flush with the line of the summer solstices (dotted line at the bottom of the dial to the right). The numbers correspond to the local standard hours.

Sidereal Time is time reckoned from the motion of the earth (or a planet) relative to the distant stars – rather than with respect to the sun. These dials were designed for pedagogical purposes to show how to calculate the position of the stars. The principle of reading consists in locating the sidereal time for a classical hour, given by the shadow of the sun and to deduce the sidereal time for any other hour taking into account the difference in scale between the two.

Despite the unfortunate restoration in 1988, this is still a very fine and almost unique collection of sundials, and well worth a visit if you are in Paris.