Reigate Priory Park is 58 hectares in size and a Grade II listed park open to visitors. In the grounds of Priory Park, is Reigate Priory, which was originally founded in the 13th century before being converted to a mansion during the Tudor period. The Priory came into the ownership of Lady Henry Somerset in 1883, after the death of her father, and it was Lady Henry Somerset who made dramatic improvements to the estate.

Between 1885 and 1905, the main entrance was moved and the Monks’ Walk, and Sunken Garden were added. The Sunken Garden is a geometric layout of plants in the pattern of Lady Henry Somerset’s initials, with an ornamental pond in the centre. The sundial with its graceful female figure forms the central figure of the western alley or Monks Walk. However, the current sundial is not the original but does reflect the original style.

Monks Walk and the Sunken Gardens were restored by the Heritage Lottery Fund in 2007. If you’d like to visit the park, you can find more details here: 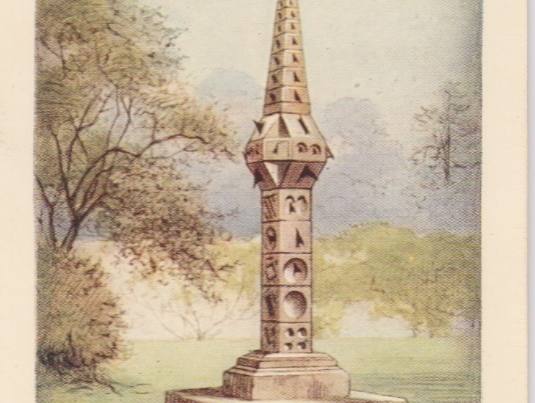 Sundial at Kelburn Castle Near Fairlie

An Armillary Sphere carefully packed for it's jour

We love the sunshine gnomen on this Analemma carve

It’s great to be in the @houseandgardenuk Christ

Anyone in England feeling this sentiment now that

Just dreaming of sunshine like this, please note t

The sun peaked through the clouds just long enough

With the sharpest and brightest of mirror finishes