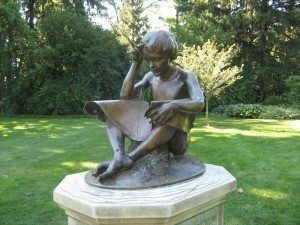 Sundial of the monthSundials in public art

Sundial, Boy with Spider is located within the Oldfields Estate on the grounds of the Indianapolis Museum of Art in Indiana.

Designed by American artist Willard Dryden Paddock and installed in 1917, at first glance, the striking bronze sculpture of a boy sitting cross-legged with an open scroll in his lap bears no resemblance to a sundial. However, on closer inspection, the relevance of the piece can be better understood.

The scroll in the boy’s lap is in fact engraved with hour lines and an analemma for each hour (for an explanation of the analemma see my Theory of Sundials page), allowing the time to be read over the course of the year. The scroll is also marked with coordinates that mark the original location of the sculpture: Latitude North 39° 50′, Longitude West 86° 10′.

You will notice the boy’s left hand rests on his left knee, his right hand in contact with his head, casually holding a twig over the scroll. A wire wrapped around the end of the twig hangs straight down to the base, where it is fixed to a flower. A bronze spider hangs on the wire. The wire acts as the gnomon and the spider as it’s Node (showing the dot of shadow which follows the analemmas.)

The base of the sculpture features an inscription in Roman letters which reads
“Mark ye the hours of light that slip away. Spin then thy hour of sunlight while ye may.”

Boy with Spider is a fine example of Victorian Romantic sculpture, much of which is too sentimental for contemporary tastes, but this sculpture is charming and functional, and so worthy of inclusion as our Sundial of the Month. 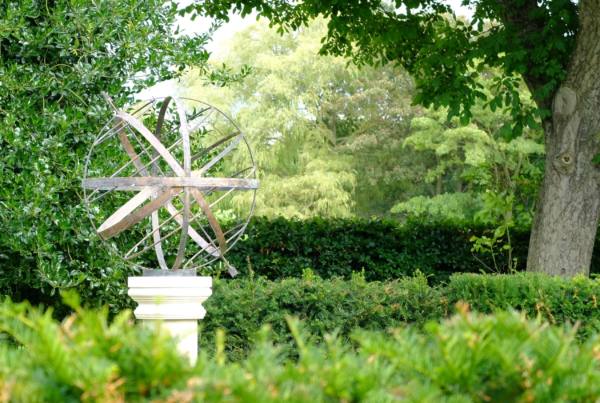