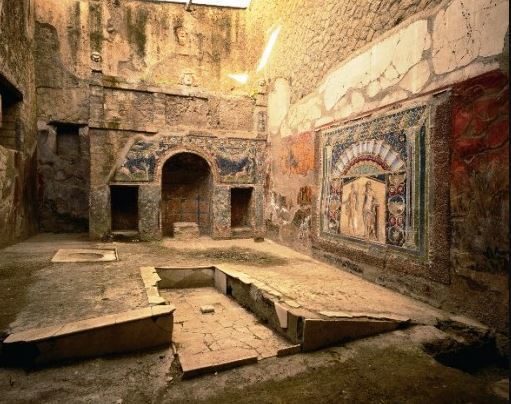 History of SundialsSundial of the month

Although we can’t be sure, it seems that the Romans were the first to make sundials purely for fun, and a perfect example of Roman frivolity is this portable sundial discovered in the Villa dei Papiri in Heracleum.

Heraclium is on the Bay of Naples and was buried by 30m of ash during the eruption of Vesuvius that destroyed Pompeii in 79CE.

The Villa dei Papiri was one of the most opulent villas in ancient Rome, possibly belonging to Julius Caesar’s father-in-law, Lucius Calpurnius Piso Caesoninus and is famous for its collection of statues, frescoes, and a library which contained over 1800 papyrus scrolls, from which the villa gets its name.

The villa was initially excavated between 1750 and 1765 mostly through underground tunnels. While excavating the villa in the 18th-century, workers found a strange lump of silver plated bronze small enough to fit in the palm of a hand. 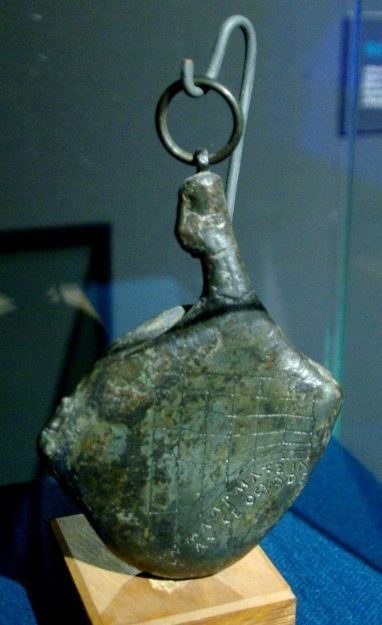 It was immediately identified as a sundial by the markings, and perhaps uniquely, it was seen to be in the shape of an Italian cured ham, or prosciutto. (some scholars claim that it is in the shape of a leather water bottle, but I think they are rather stuffy and lacking in imagination!) What do you think? 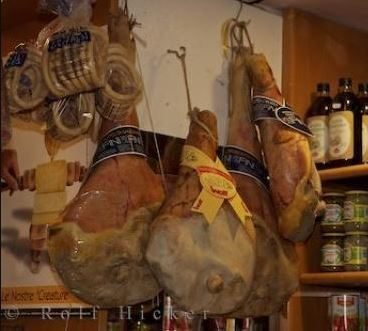 The side of the ham has a grid engraved onto it, the vertical lines of which represent the months, and the horizontal lines the hours. Being a Roman sundial there were 12 hours between sunrise and sunset, and they vary in length between winter and summer, and so the grid is irregular.

The Sundial Ham has been on display at the National Archaeological Museum of Naples until last year when Christopher Parslow, the Professor of Classical Studies with Wesleyan University Connecticut visited Naples and took dozens of pictures of the sundial ham.

When back in Connecticut he had them digitalised and a 3d printer was used to create an exact replica of the sundial ham, but in plastic this time. Presumably his academic budget wouldn’t stretch to bronze! 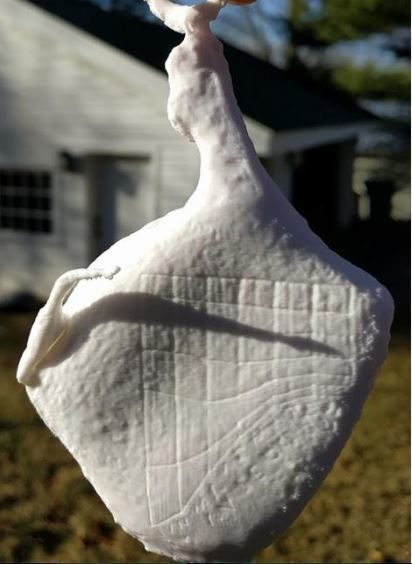 The original sundial is missing its gnomon, the part of a sundial that casts a shadow, but as it had been described as looking like a pig’s tail, Professor Parslow re-created that too. The sundial hangs from a ring so that the sun falls on its engraved face, causing the tail to cast a shadow across the grid. With a bit of experimentation, he found that the Sundial Ham works pretty well.

However, using the Sundial Ham is best described as fiddly: To tell the time, the user aligns the ham so that the tip of the tail’s shadow falls on the vertical line for the current month. Finally, the user counts the number of horizontal lines from the top to the line closest to the tip of the shadow. That indicates the number of hours after sunrise or before sunset.

Theoretically it can read quarter hours, but Professor Parslow has found that it is only really good for hours!

Professor Parslow presented his first round of results regarding the portable sundial in early January at a meeting of the Archaeological Institute of America and the Society for Classical Studies. The original will be on display at the Institute for the Study of the Ancient World in New York until 23rd April 2017, so if you are going to be in New York, I urge you to go and see it.