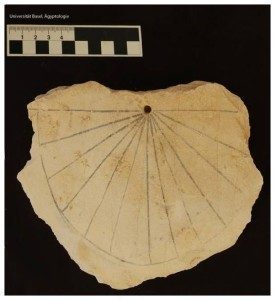 For February’s sundial of the month we are going back in time to one of the world’s earliest dials.

Dating to the 19th dynasty, or the 13th century B.C.E., this sundial was found on the floor of a workman’s hut, in the Valley of the Kings, the burial place of rulers from Egypt’s New Kingdom period (around 1550 B.C.E. to 1070 B.C.E.). It may well be the world’s oldest Egyptian sundial.

The sundial is made of a flattened piece of limestone, called an ostracon, with a black semicircle divided into 12 sections drawn on top. Small dots in the middle of each of the 12 sections, which are about 15 degrees apart, likely served to give more precise times.

A dent in the center of the ostracon likely marks where a metal or wooden bolt was inserted to cast a shadow and reveal the time of day.