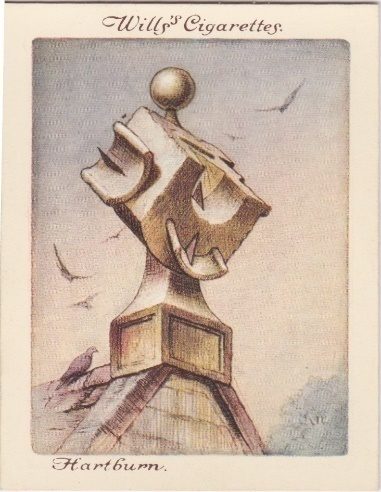 The sundial occupies a very unusual position as it is fixed on the gable end of the church. The main block of stone is lectern-shaped and on the various sides are semi-cylindrical hollows in which the hour lines are drawn, and the gnomons or markers are fixed. As is usually the case with older dials of this type there are also dials on the flat surfaces while the ball which surmounted it and probably bore hour lines originally. Many sundials of similar patterns were set up during the 17th century, several which still survive.

This month’s sundial is located at St Andrew’s church in Hartburn Northumberland. The church a grade 1 listed building is of historical interest. In 1207 King John confirmed Hartburn to Tynemouth Priory. In 1255 Henry III gave it to St. Albans to provide the monks and their guests with a competent supply of “bread and ale”. Skeletons in the tower forensically dated pre 1100 suggest Waltheof as donor and Tynemouth Priory as builder. There are two daggers above a Maltese Cross on the doorpost which tell of a Knights Templar Preceptory in 1250. Of special interest are the Masons’ marks, carved heads, fish, Napoleonic banners and Florentine lamps.