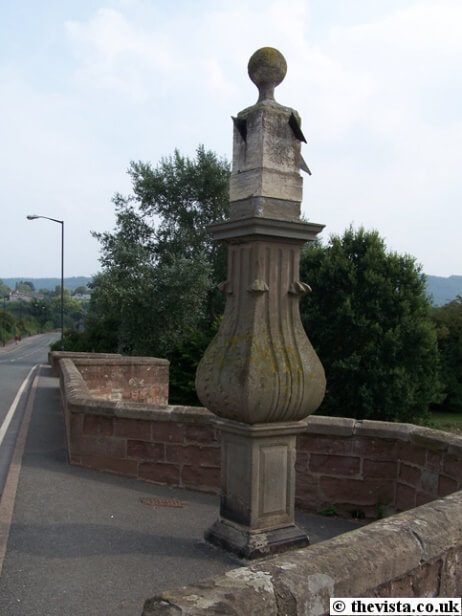 Wilton Bridge is on Wilton Road, just outside of the historic and picturesque market town of Ross-on-Wye in Herefordshire. It was built between 1597 and 1599 out of red sandstone and replaced a wooden bridge that was previously there. The wooden bridge was replaced because in the winter months the river was a raging torrent and the ford impassable.

During periods when the river was high a ferry would run. One winter the ferry sank and as a result of an Act of Parliament in 1597 it was ordered that a stone bridge needed to be built to stop the incident happening again. The stone bridge was funded by imposing a tax on every town and village in Herefordshire, except for Hereford city itself. After it was completed, the bridge became a toll bridge and the money awarded to Charles Bridges as a reimbursement for his loss of ferry rights.

The sundial, which is still present today, was originally erected on the north side of the bridge in 1718. It was later moved to its current position when the bridge was widened during the second world war. The sundial was commissioned by Jonathon Barrow originally from Monmouth but lived in Bridstow just outside of Ross-on-Wye. The sundial is unusual as it has a cube dial with four gnomons and each face is inscribed with hour lines. Around the top part of the dial the following is inscribed:

Which pass so swiftly away

And do not make delay.

If you’d like to visit the wonderful town of Ross-on-Wye, you can find out all you need to know by visiting www.visitrossonwye.com