Sundial of the month 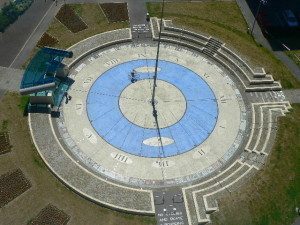 The focal point for the Gosport waterfront is a unique public time piece and performance space named ‘Timespace’. To celebrate the Millennium, the Timespace draws a physical and spiritual link between the Holy Trinity church and Portsmouth Harbour. The birth of Christ and the start of the measurement of modern time is symbolised by the line leading from the Timespace to the church and the year 2000 by a line leading from the space to the Harbour.

The design takes as inspiration Albert Einstein’s theory of relativity and his space-time cone diagram is represented within the paving. At the central ‘here and now point’ is a 17 metre high mast which casts the shadow for the sundial. The shadow of the cones fixed through the mast marks the sun time. When the sun crosses the meridian, the line of true north marked on the paving surface, a small circle of light through the cones indicates not only the time but also the date. 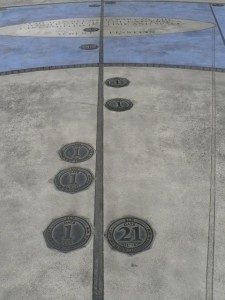 The entrance to the Timespace is through a gateway which houses a digital clock linked to LED coloured lighting within the paving surface which marks the hours, five minute and five second intervals. The clock is linked to an acoustic system which enables to clock to ‘chime’.

A mosaic around the perimeter between the symbolic date lines depicts events and characters though Gosport’s history over the past 2000 years.

The central mast and gateway are illuminated at night providing a dramatic backdrop for the harbour, visible from Portsmouth and out in to the Solent.