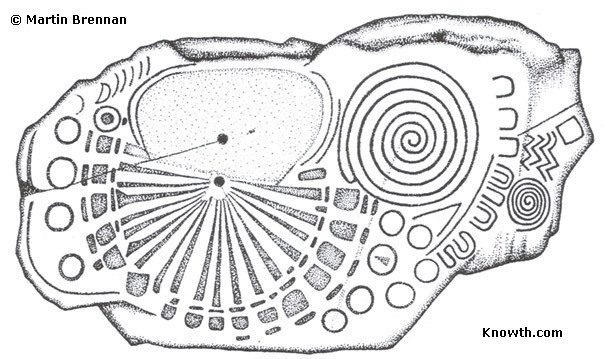 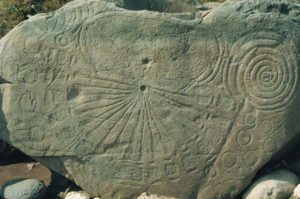 The Sundial Stone is one of the oldest sundials that we’ve featured on our website as ‘Sundial of the Month’. Discovered by American, Martin Brennen in the Boyne Valley in Ireland, the Sundial Stone measures just 18 inches and is believed to be over 5000 years old.

The discovery of the ancient sundial by Brennen follows the earlier unearthing of Irish Stone Age art which was originally excavated by archaeologists in the 1940s. The Sundial Stone was discovered at Knowth while Brennen was examining a passage-mount in a megalithic tomb.

Knowth is one of three Passage Tombs situated in the valley of the River Boyne, collectively described as ‘Bru na Boinne’. Newgrange and Dowth are the other two. The Great Mound at Knowth is surrounded by 18 smaller satellite mounds and contains two passages with entrances on opposite sides.

The Sundial Stone which is believed to have enabled its Stone Age creators to tell the time with extreme precision is divided into eight sections. There is sufficient evidence to suggest that the ancient people of the Boyne Valley were interested in the heavens, had an understanding of the lunar, or metonic cycle, and were able to predict lunar eclipses, with lunar maps also being discovered at the site.

One of a series of Kerbstones at the site, at the time of its discovery in 1980, the Stone Sundial was regarded as the oldest and most valuable sundial ever to be discovered. While others have since been discovered, it still arguably one of the oldest.