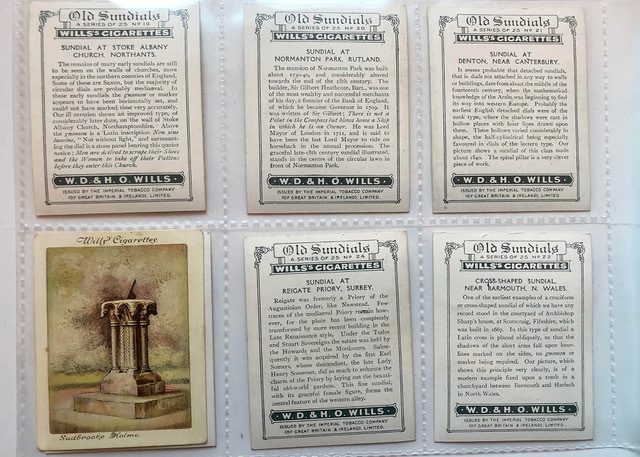 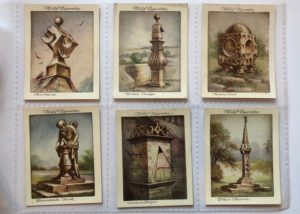 Clocks and sundials will always hold a special interest to me. I love time and the outdoors and I like to keep my eye open for anything sundial related – no matter how unusual. So, I was delighted to stumble upon this set of ‘Old Sundials’ cigarette cards on eBay.

Decorative and collectable cigarette cards first appeared in 1875 when US tobacco company, Allen and Ginter released cards depicting actresses, baseball players, Indian chiefs and boxers in packets of their cigarettes. Other US tobacco companies soon followed suit and the idea was then adopted in the UK and many other countries.

While they had already featured advertisement cards in their cigarette packets, it wasn’t until 1895 that W.D. & H.O. Wills produced their first set of interest cards, following the lead of fellow UK tobacconist, John Player & Sons. Wills’ first sets included ‘Ships and Sailors’ and ‘Cricketers’, until in 1928 they produced their ‘Old Sundials’ set with 25 cards depicting sundials around Britain.

While cigarette cards were fairly common many years ago, it is unusual to find a full set in such good condition. They were so ubiquitous that I doubt many people looked after them, which makes a clean full set so special.

Each cigarette card features a different illustration of a sundial with information about the dial and its location and history on the reverse. The sundials shown range from The South West, to Wales and Scotland, so a lot of research must have gone into them.

Sadly, apart from the date they were issued, 1928, we know little about the Old Sundials set of cigarette cards.

We’ll be talking about some of the cards in more detail as part of our regular ‘Sundial of The Month’ feature but I would love to see if I can visit each one.