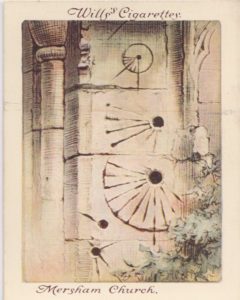 March sees the first ‘Sundial of The Month’ taken from our Wills’ Cigarette Card series of ‘Old Sundials’. You can read more about the collection and how we came to acquire it here. We’ll be taking a look at a different sundial from the series each month as part of our regular feature.

Here’s what we already know about the Incised Sundials at Mersham Church from the information on the reverse of the cigarette card.

“Sundials of this type were known as Mass-clocks, and appear to have come into general use in England about the time of the Norman Conquest. Candles, marked so as to indicate the time as they burned away, had been constructed by King Alfred, but such luxuries were only for the wealthy, while Mass-clocks were cheap, easily made and lasting. Probably most churches had at least one, and in spite of decay and re-building hundreds of these simple time-markers still remain, over two hundred being known in Somersetshire alone. Beside the south doorway of the church at Mersham, Kent, are seven circular dials cut in the stone, the largest about 9 inches in diameter.”

While it has been recorded in the Doomsday Book that a church has graced the site at Mersham since 1086 AD, the Grade 1 listed church has seen several updates and additions since then. This sundial, often called a ‘scratch dial’ was most likely hand made by priests or monks to keep track of the time for mass or the angelus. I talk more about this type of dial in the History of Sundials page. By their nature, many of these dials have been worn away, making existing examples all the more special. 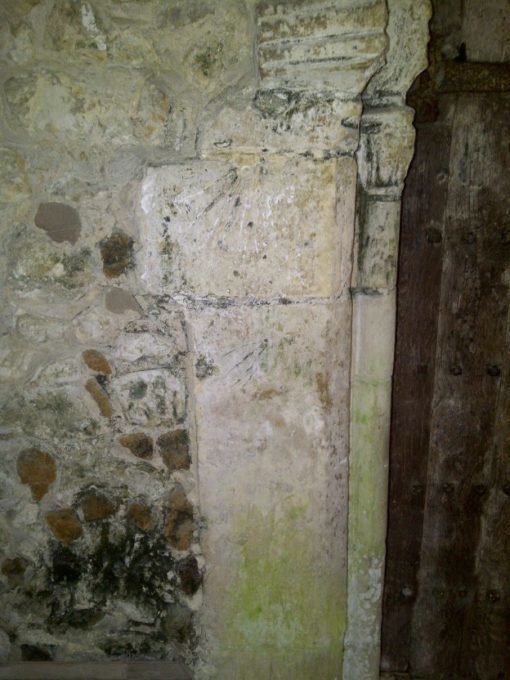