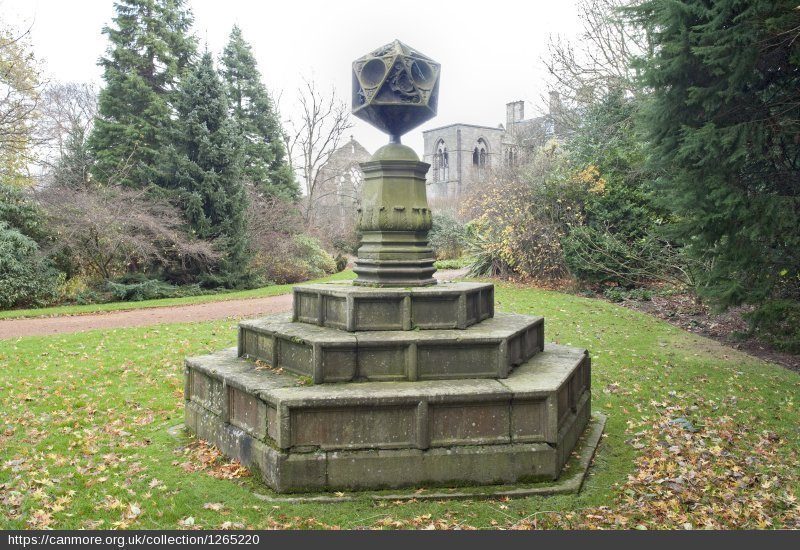 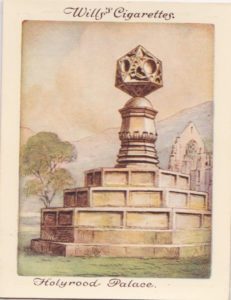 We’ll be taking a break from our Wills’s cigarette card series next month. Don’t worry, we’ve plenty more ‘Old Sundials’ cards to share with you soon. For now, you can enjoy Augusts ‘Sundial of the Month’, The Queen Mary Sundial, Holyrood Palace.

“This famous sundial, one of the most interesting in Scotland, stands in the gardens of Holyrood Palace, Edinburgh. It is a facet-headed dial and is set upon a hexagonal pillar mounted on steps. The facets are covered with hollows of various shapes, circles, triangles, hearts and quaint faces, which cast shadows to mark the hours; in one hollow, for example, the nose of a grotesque face forms the gnomon or marker, which throws the necessary shadows. This sundial is said to have been presented by Charles I to Queen Henrietta Maria, the sum of £408 15s. 6d., Scots, having been paid to John Mylne, Maisonne for the working & hewing of the diyell.”

It’s worth noting that Queen Mary’s Sundial has not always resided in its present position at Holyrood House. During the mid-nineteenth century, a new entrance drive and gates were created on the site of the King’s Garden. In addition to its relocation, the structure itself has seen a few updates. The column was replaced in 1908 with a design by William Thomas Oldrieve, and it’s possible that the steps that we see today are a recreation of the original ones.

Multi-facetted dials were a particular cultural feature of Scotland in the 16th and 17th century and it is thought that Scotland had more of this type of dial than any other country in Europe.