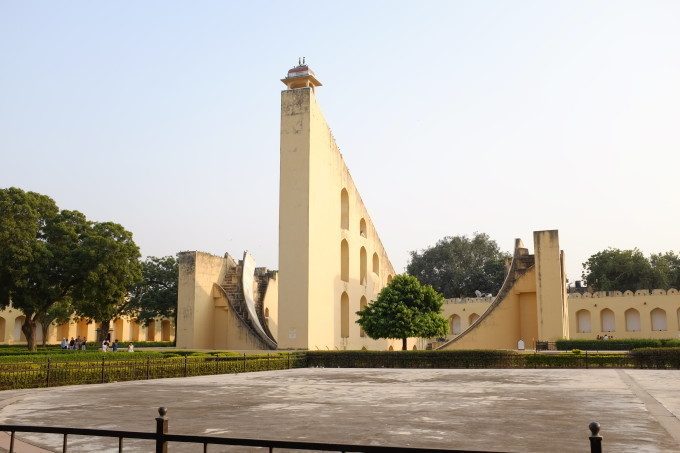 By capelJanuary 5, 2017November 15th, 2020No Comments
This is the second in my critique of the Jantar Mantar Royal Observatory.

The Samrat Yantra, loosely translated as “Supreme Instrument”, is often described as the largest sundial in the world. Readers of this blog will know that this isn’t true! But it can certainly claim to be the oldest ‘historic sundial’.

The scale of the Samrat Yantra is inspiring with the base of the gnomon being 44 metres long, the hour band being 30 meters in diameter, and the structure towering at 27 metres high.

The Samrat Yantra is an equinoctial sundial of enormous proportion. Although one of the simpler instruments at Jantar Mantar, and not too different from sundials which had been developed hundreds of years earlier, the Samrat Yantra is important because it measures time to a precision that had never previously been achieved. The Samrat Yantra at Jaipur is capable of measuring time to an accuracy of two seconds.
The essential parts of the Samrat Yantra are the gnomon, a triangular wall with its hypotenuse (the top edge which casts the shadow) parallel to the Earth’s axis, and a pair of quadrants on either side, lying parallel to the plane of the equator. (This is a similar layout as my armillary spheres and form the basis of the most accurate sundials) The quadrants are marked with the hours, minutes and seconds.

On a clear day, as the sun passes from east to west, the shadow of the gnomon falls on the scale of the quadrant, indicating local time. It is an impressive reminder that we are turning to be able to watch the shadow creeping across the hour band.

This largest of sundials at Jantar Mantar is capable of extremely precise measurements. However, it is immediately apparent to anyone who tries to tell the time that because of the distance of the edge of the gnomon from the quadrant scale, the shadow has a soft edge. This is a problem with any extra-large sundial, and is caused by the fact that the sun’s apparent size, viewed from Earth, is approximately 0.5°, and so isn’t a pinpoint but a vaguer light source.

This means that although the surface of the quadrant is inscribed with fine markings to indicate 2 second time intervals, the soft edge of the shadow may span 6 or 7 seconds and the centre of the shadow can only be estimated.

A partial solution (or bodge) is to hold a thin object such as a pen or taut string parallel to the shadow edge and about 1 cm above the quadrant surface. Moving this into and out of the shadow, and noting the spot on the surface where its shadow disappears, gives an exact indication of the centre of the shadow.

The Samrat Yantra can also be used to measure the height of the sun in the sky. These measurements are achieved by climbing the stairs up the centre of the Gnomon, then, when your shadow hits the hour quadrants, reading your position from the scale that is engraved alongside the steps.

This can also be achieved by running your finger along the gnomon of your armillary sphere.

The Samrat Yantra is truly impressive in its grandeur and accuracy, and is justifiably the centre piece of the Jantar Mantar Royal Observatory. 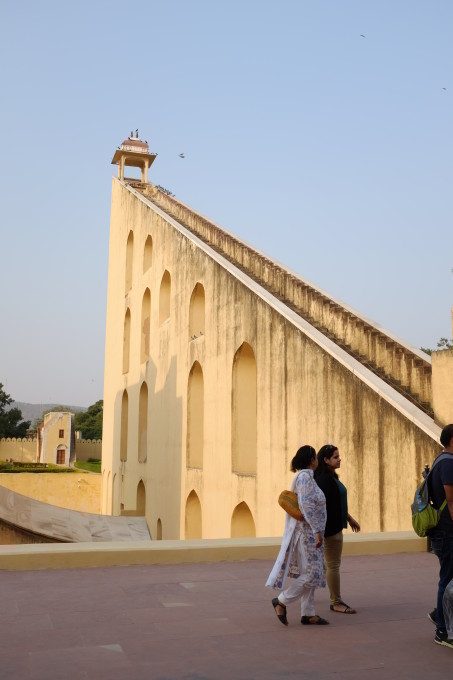 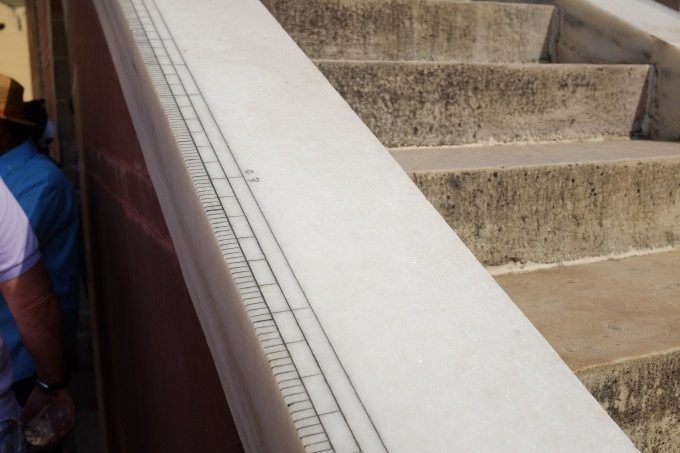 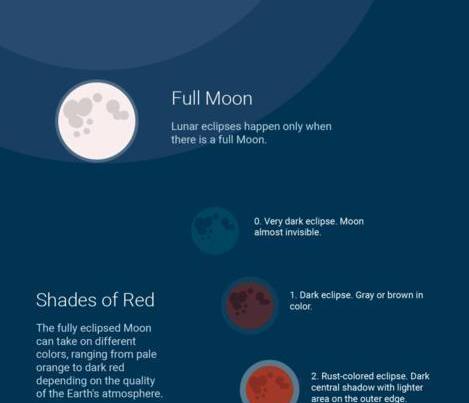 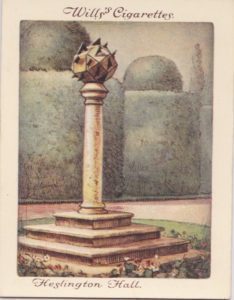